To provide scholarship grants to deliver financial resources to deserving Brown County High School graduate(s), or a student who has achieved a GED, and who has been accepted to a bachelor’s degree program at an accredited college/university.

The Temple Memorial Scholarship fund was established on August 28, 2006 by Dawn Snider (Former wife), Caleb Temple (Son),  and Anastasia Temple Otto (Daughter). The fund has been active for eight years and now holds a monetary value of $67,295. Since 2007, the fund has awarded one scholarship every year to a selected Brown County High School graduate.

Community journalism is usually associated with the words, “small-town” or “quaint” but what is truly behind those words opens a larger, vast vocabulary in the minds of local citizens. Citizens who strongly support local news and rely on the contents of the local newspaper to keep informed about their community.

Bruce Gregory Temple, former Brown County Democrat publisher, was one of those citizens. Having owned the local newspaper for 31 years, Greg, who passed away in 2004,  made a lasting impact on Brown County.

“He really loved the role that journalism and news played in the fabric of a community,” said Caleb Temple, Greg’s son, “He felt the role of the local newspaper, was glue, that held the community together.”

Greg spent his childhood in Bloomington, IN and graduated from The University School in 1959. After his graduation, he took courses at Indiana University, and then enrolled at Hamilton College, in Clinton N.Y. and later went back to Indiana University for the School of Law, 1963, and the School of Journalism, 1982. Greg excelled in school, becoming the Senior Class President at Hamilton College and involved with Gryphon Society social fraternity and the ‘Student Senate Governing Body’.

“He said education was the key to everything. He thought everyone should have a liberal arts degree, he had his in government and political science,” said Snider, “ He was a big believer in liberal arts. He loved wearing his shirt that said ‘ Liberal arts will think for food’.”

With Greg  vast experience in journalism, he managed a career that was fulfilling his passion, which was partly derived from his father, Bruce Temple. A journalist himself, he owned a Bloomington newspaper and worked for the courier journal in Louisville, KY. 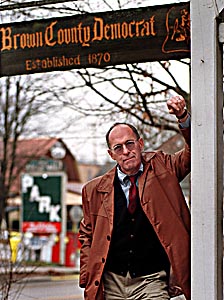 “He was a good businessman, he had good acumem of how to turn something into a profit,” said Snider.

With respect to all Greg managed to do, he also was highly involved in the community. From being a member of the Brown County Community Foundation Steering Committee to taking a position as Director of the Brown County Big Brothers, Big Sisters, giving back was very important to him.

“He just loved Brown County.” said Caleb, ”He liked the community and cultural feel of Brown County, which was vibrant.”

“He was a very active person and engaged others,” said Snider.

Snider also said that Greg enjoyed doing deeds for Brown County citizens anonymously, not asking for praise or thanks.

“Greg also did things people didn’t know about, like, he was a benefactor for some people that needed help,” said Snider, “It’s a very Godly thing.”

When not busy working or volunteering, Greg enjoyed focusing on his passion for Jazz music.

“He was a Jazz aficionado,” said Snider, “He could give you cliff notes on everything about Jazz.”

With this interest, he spent time at The Louisville Jazz Society, International Association of Jazz Record Collectors, WHCL-FM content programmer/on-air host for “Jazz Directions”, Disc Jockey for WHAS-FM, WHFB-FM for “Golden Age Weekly” and “All That Jazz”.

“He loved it, embraced, lived it,” said Caleb, “I believed it was the nature of the music that was as creative as his style of journalism.”

Whether Greg was making an impact through journalism or through charitable means, the impact he did make was undeniable. By granting awards yearly, the ‘Bruce Gregory Temple Memorial Scholarship’ fund allows Greg’s spirit to stay alive.

“Although he didn’t say he wanted it done, we knew he would really apreciate it and we wanted his memory alive,” said Dawn Snider, former wife,  “He still gets to contribute to this community he loved so much.”

To Caleb, the Temple scholarship fund is very special to him in many ways

The Temple Scholarship is not only a memorial for Greg, it is a way to help students fulfill their dreams and passions, like Greg did.

“I just feel like we are leaving the world a little better,” said Snider. 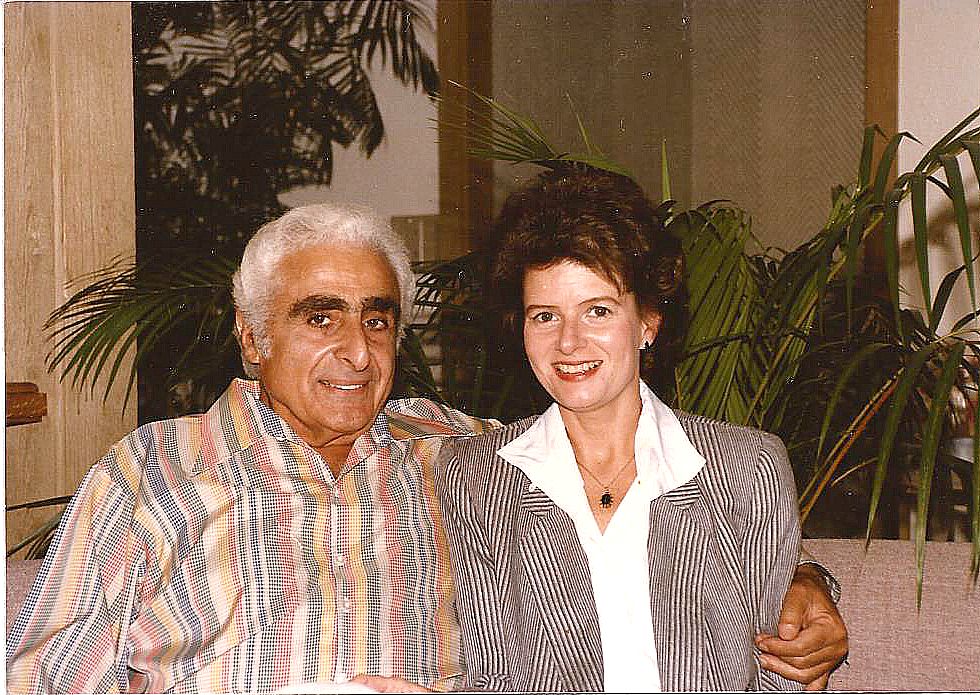 To provide tuition assistance to Brown County residents pursuing a two-or four-year degree on a full- or part-time basis at any Ivy Tech State College.

Residents of Brown County who have received a high school diploma or G.E.D.; or students from Brown County currently attending Ivy Tech State College, including past recipients of the Eyed Scholarship.

John Eyed, Eyed-Ivy Tech scholarship founder, was a man whom did just that. After living a life of travel, he came back to Brown County to stay and make a final impact.

“He always said he would retire in Brown County,” said Cheryl-Eyed, former wife and co-founder of the Eyed scholarship.

His initial discovery to Brown County was weekend trips with his former elementary school teacher to explore the growing art scene and the beautiful nature that Brown County possessed. At the time, Nashville, newly established art colony, was home to many famous Indiana artists.

“He was able to meet some of those early artists,” said Eyed.

During John’s later time in Brown County, he was highly involved with the local community.

“He was very interested in the arts.” said Cheryl, “He was a long-time volunteer at the Brown County Art Gallery.”

Also interested in the environment, John held the position as president of the Sassafras Audubon Society for two terms and spent time as a lobbyist to prevent Marble Hill Nuclear Power Plant.

The Eyed scholarship provides financial assistance to Brown County High School Students who wish to pursue a college education. Growing up in a lower income household, Eyed was inspired to help others in financial need pursue educational goals.

“It was very important to him to help other students who couldn’t afford to go to college,” said Cheryl Eyed, “He felt education was important so he worked numerous jobs to be able to go.”

Cheryl is very pleased with the scholarship and what student feedback she has received regarding the fund.

“They express a lot of gratitude in the thank-you notes and the chance the scholarship is providing them for their future.” said Cheryl, “It makes me feel proud we were in a position to establish the scholarship.”

Along with satisfaction of the Eyed-Ivy Tech scholarship, Cheryl believes the Brown County Community Foundation as a whole is extremely helpful to students.

“I think the whole idea of the community foundation and what they’re doing and the different scholarships that have been set up  and how in one way or another, they are helping students, whether its because they’re financially needy or just helping them pursue whatever career path they are interested in,” said Cheryl. 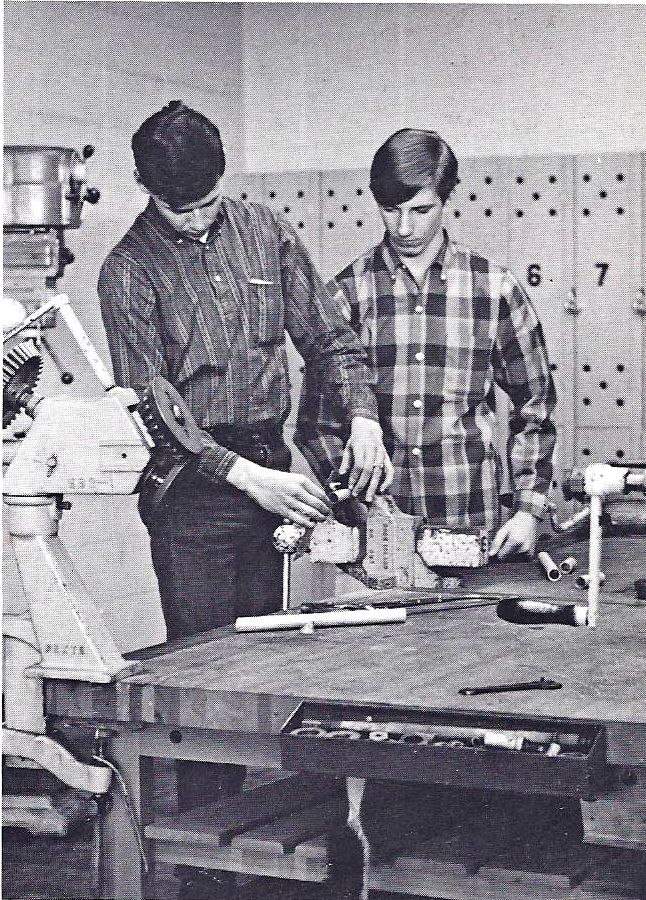 Larry C. Banks Bronze Star Memorial Scholarship was initially established on August 16, 1994 by Gus Schroeder, of the Larry Banks Memorial Scholarship Committee. Later revised, the fund was approved again on January 24, 2001 by the donor, Michael O’Hara. The fund has been active for 20 years and holds a monetary balance of $32,454.

Gone, but never forgotten, Larry Banks was a man of honor and pride. When he graduated from Brown County High School in 1966, he immediately enlisted in the army during the Vietnam War.

“The last time I saw him he was backing out of my driveway waving at me and we were both scheduled to leave the next day,” said O’Hara, Bank’s high school best friend.

Banks was private first class and enlisted in the 26th infantry of the Army. On November 7, 1967, Banks received a Bronze Star Citation for ‘the successful withdrawal of the other members of his squad’ after he passed away. He was the first and only person taken in combat from Brown County.

According to O’Hara, he was a really good kid and wanted to do what he thought was right, which was enlisting into the Army. 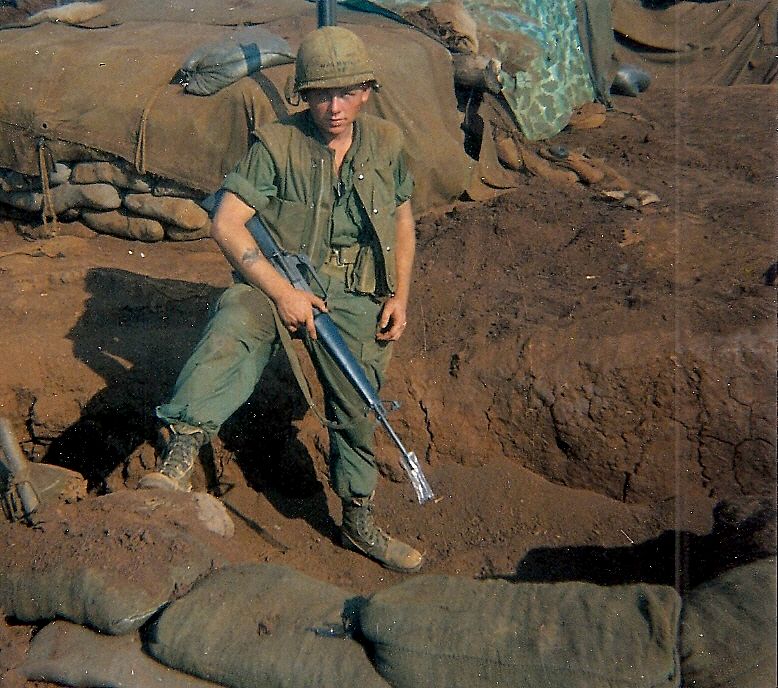 “What he did was a very brave thing,” said O’Hara, “In fact, one of the men who was with him that day earned a medal of honor because he protected Larry before he got killed.”

O’Hara is also the author of ‘Lest We Forget: The History of Veterans Affairs’, featured on Bravo! The Project Documentary, and delivered the Brown County Memorial Day speech on May 26, 2014 to over 350 people. It was after the speech that he realized he wanted to create a memorial for Banks. The two-part memorial consists of the Brown County High School gymnasium being named after Banks and the Banks Memorial Scholarship being established at the Brown County Community Foundation. The Banks Scholarship, established in 1994, was a means to stamp Bank’s memory in Brown County.

“We needed to have something more permanent so we decided we would have the scholarship,” said O’Hara.

“In May 1994, we had to have $2500 for the account to stick and we had a certain time period to get it. I had hustled around town and only had about $1800. I came home that day, sat down by the church pew, said a little prayer, went in and ate my supper. I came back, got on the phone and start calling people, by the time I went to bed I had the $2500,” said O’Hara, “And so when we went to the meeting the next evening, i was telling the story about how I didn’t think I would get the $2500, I thought I was going to fail. After that, Del came up to me and said ‘You misunderstood what we said, you’ve got five years to get the $2500 and it had only been about three to four months’.” 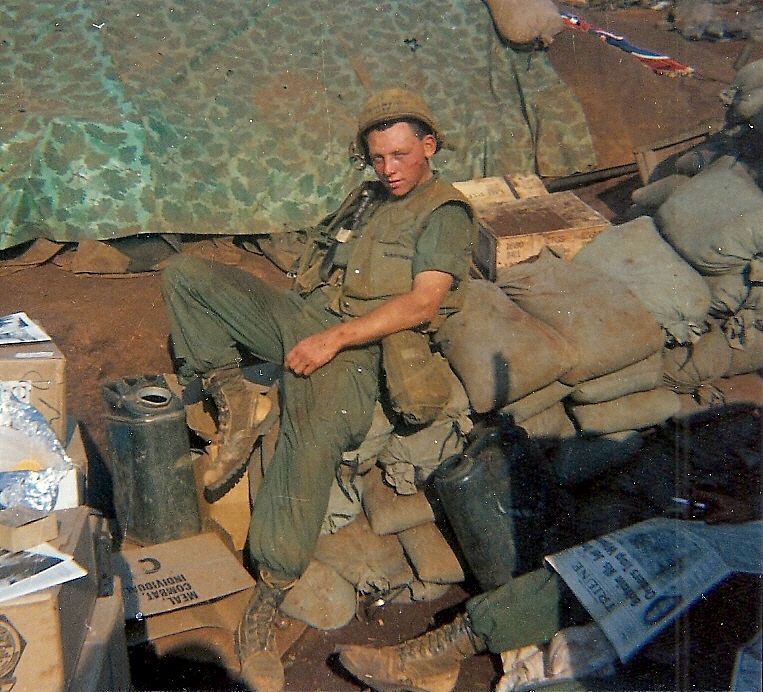 Today, the scholarship provides financial assistance to Brown County students who are interested in vocational training.

“It’s a vocational scholarship because we knew Larry would not go to college, like me and a lot of our other classmates and because there are virtually no scholarships for vocational training,” said O’Hara, “There are a lot of kids who could benefit from that. We wanted it to be for someone like Larry, who reflected his life.”

Although Banks has passed, establishing the memorial scholarship makes it clear that he won’t be forgotten and according to O’Hara, resembles the true essence of the community.

“This particular scholarship is not about me or Larry Banks, its about this community.

It’s a reflection of this community and what they are willing to put back into their young people.

The foundation as a whole is a reflection of who we are as a community,” said O’Hara, “If it fails, this community fails, its that simple.”

O’Hara’s goal is to reach $40,000 in funds for the Banks Memorial Scholarship and to continue working on Veteran projects in the future.

We use PayPal to accept donations. You do not need to have a PayPal account to donate. You may use either a bank account or credit card.